A great deal on Groupon led me to actually see 21 Jump Street in theaters.  It turned out to have quite a few funny scenes.  One of those great moments played repeatedly in the trailer.  It’s when Jonah Hill’s character runs into a relative while undercover with a group  of high school drug dealers.  He only has a few moments to quiet her before his cover gets blown so he: 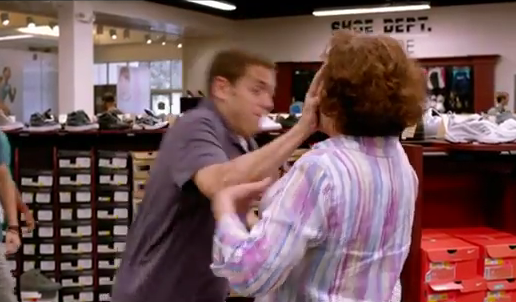 My friends, this is referred to as “mushing”.  A mush (pronounced like “push” with an M) is when you grab somebody by their face and then push said person open-palmed by said face…I said.

There are a few more examples of this in pop culture.  Like on an episode of Friends where Joey is flirting with a girl across the street from the apartment bay window.  The girl notices Monica standing next to him and before she can get the wrong impression, Joey:

Another very popular example of this occurs during a great Chappelle Show sketch in which Dave shows us how much cooler everyday life would be in slow motion.  While making his way  through a crowded club, Dave is approached by an enchanted girl.  But he’s too focused to stop for that trick.  Solution?

But my absolute favorite is from the 1995 Notorious B.I.G. music video for “Big Poppa.”  I want you to meet somebody.  Let’s call him… Tommy: 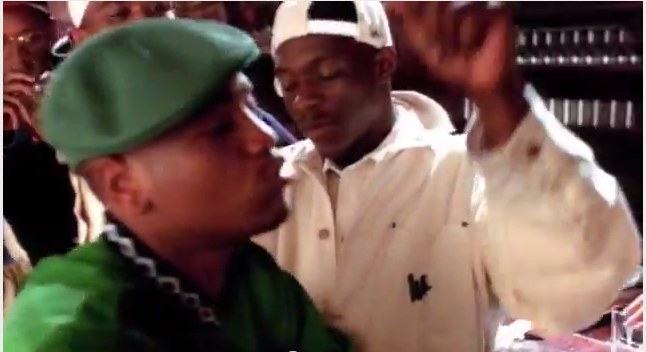 Tommy’s the guy in white.  He’s in the club, over by the bar, just dancing and having a good time.  He’s had a couple drinks.  Feeling confident.  Maybe he’ll talk to a pretty girl.  Maybe that piece of ass right over there:

Out of his league?  F that!  Go for it, Tommy!  It’s in the bag!  Tommy locks in on that ass and goes for it.  He’s a good looking guy, plus he’s got money.  Just buy her a few drinks and this is a closed deal.  There’s just one liiiiiitttle problem…

Tommy’s night just got ENDED by Black Tony Soprano.  Quick! Get back in there before-

If you’ve got a great example of mushing, post it below!

In The Bagg’s New Look

A Quick Pop-Pop Treat For Any ‘Arrested Development’ Fan

And this is EXACTLY why I created this website.  lainp you are killing it.