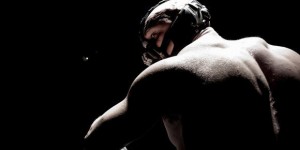 Nothing is more pleasant than being greeted by councilman Tommy Carcetti – otherwise known as Aidan Gillen to those of you who have not yet enjoyed the famous HBO series “The Wire” – at the beginning of the preview for a movie that does not come out until July 2012 AND happens to be the sequel to the greatest comic book film of all time (quite a mouthful eh?). In any case, Mr. Carcetti is a long way from Baltimore as we see him anxiously waiting in front of a private jet in the middle of nowhere.